Smiling faces, beautiful beaches and ancient Buddhist temples are the first images that come to mind when you think of Thailand.

However, there’s a growing craft chocolate movement happening in the Kingdom that aims to break the mold and put Thailand on the map for quality Thai cocoa.

Let's Break This Down: hide
1 FOOD FOREST
2 A VERY BRIEF HISTORY OF THAI COCOA
3 THAI CHOCOLATE RECEIVE INTERNATIONAL AWARDS
4 THE FARMER, THE ENTREPRENEUR AND THE CRAFT CHOCOLATE MAKER
5 SUPPLY AND DEMAND
6 IN CONCLUSION

A little over three years ago I started planting our permaculture food forest.

On visiting a collectors nursery in Chomburi province, I purchased a couple of cocoa trees, a forastero and a trinitario amongst many other tropical fruits trees and rare plants.

Back then I didn’t have much knowledge about chocolate or where it came from. I did however occasionally try one of the many crazy flavoured Japanese KitKats out of curiosity. That developed into a naughty but nice habit for a while. I’m over it now!

So my wife and I started talking about growing more cocoa trees and making chocolate at home. I like to be outdoors exercising my green thumb and she loves creating delicious dishes and baking. As a married couple, we thought it would be an interesting project we could do together.

Cocoa first came to Thailand via Malaysia over 100 years ago, then in 1952, the government started subsidising cocoa cultivation with the view to making it big as a commercial export.

However, by the late ‘90s growing cocoa in Thailand had declined considerably with farmers switching to other higher-value crops. The dreams of delicious Thai chocolate melted away…

In late 2017 we started researching the local Thai cocoa market and found only a handful of craft chocolate makers at the time. Kad Kakao, Siamaya and Xonocat to name but three.

Each brand was still in its infancy but already establishing its unique brand proposition.

Xoconat – make creative nano batch Thai chocolate and confections in Bangkok. Up in Smoke is an extraordinary Thai candle smoked chocolate bar while their Badass Bars are a series of signature bars with wonderful flavours ranging from vegan Thai Larb to Marshmallow & Coconut Caramel to Bai Toey Mint Crush.

Kad Kakao won an International Chocolate Award in 2018 for chocolate from Chiang Mai and another from the Academy of Chocolate for Chanthaburi. Both were in the category of dark chocolate from pure single-origin cacao.

Not to be outdone, Siamaya won silver and bronze at the International Chocolate Awards – Asia Pacific in 2019 for being delicious and unique!

They have earned themselves several achievements from the likes of the International Chocolate Awards where they snatched three gold medals, five silver medals and two bronze medals in 2019.

THE FARMER, THE ENTREPRENEUR AND THE CRAFT CHOCOLATE MAKER

Of course, Thailand hasn’t escaped the covid hysteria and the government’s response to it hit those who work in hospitality especially hard.

Many people moved from the city and idyllic holiday islands back to their villages and farms. Because of this adverse economic situation, more people have found their entrepreneurial spirit and have been tipping their toes into craft chocolate making.

Inspired by these early achievers, and maybe out of necessity we have seen many more folks making inroads to learn how to grow, ferment and roast cocoa to make bean to bar chocolate in Thailand.

Several Facebook groups have popped up and their memberships and engagement have swelled.

In January the Thailand Craft Chocolate Festival (#TCCF2021) ran a series of webinars, workshops and interviews online for a full week. Membership to this group currently stands at 1688.

Presently, it seems that the local demand for Thai cocoa outstrips supply.

Many Thai farmers are reluctant to plant cocoa unless they have more guarantees they can sell their crops.

More recently local government initiatives have brought together both parties in what is known as ‘SME Cluster’. My wife, Katae attended a two-day gathering which was over-subscribed twice over.

Connections were made and slowly but surely the fledgling cocoa industry is finding its wings and will rise again like a phoenix from the flames. I guess you could call that ‘hot chocolate!’

A trip to Thailand isn’t complete without savouring its many tropical fruits and street foods like Phad Thai, Tom Yum Goong and Phad Krapow. Now every foodie worth their salt can add Thai craft chocolate to their list of tasty treats to eat.

Anarchy Chocolate – Peace Love and Chocolate. Made in Trat, Thailand.

This article was originally published on BarTalks.net on 10 July 2021 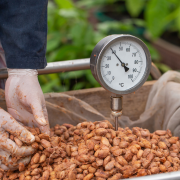 How Do You Ferment Cocoa Beans? 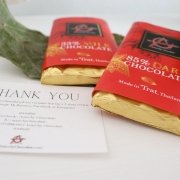 The Taste of Freedom 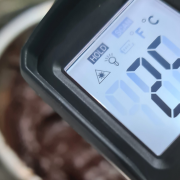 How to Temper Chocolate for Molds 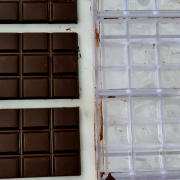 How to Make Chocolate Molds 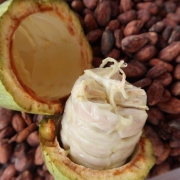 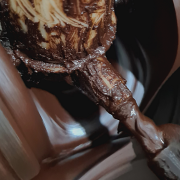 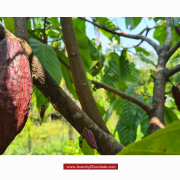 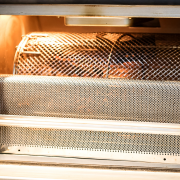 Roasting Cocoa Beans with the Behmor 1600 Plus [Review]
0 replies

From Wall Street to Cocoa Farm
Scroll to top