Most everyone loves chocolate but know little about winnowing chocolate. Whether you prefer dark, light, bittersweet or unsweetened, this confectionary is a favourite fare for many.

In fact, chocolate was consumed in ancient times, dating back to 1900 BC. What is more, this amazing food that’s roasted and ground from cacao beans is still one of the most popular food types and flavours in the world today.

Most connoisseurs do not realise that producing chocolate from the cocoa bean to bar is an in-depth and meticulous process. It requires great skill as well as timing so that the end product has the right texture and flavour.

Basically, to make chocolate, the husk needs to be removed from the cocao bean. First you have to artfully crack the roasted cacao beans then you have to separate or winnow the husk from the nib. The husk is the outer casing or shell and the nib is the center or what is left of the cocoa bean after winnowing.

Let's Break This Down: hide
1 What is Winnowing Chocolate?
2 Shelling and Winnowing of Cocoa Beans
3 How are Cocoa Nibs Made?
4 How Can the Shells of Cocoa Beans be Removed Easily from the Beans?
5 Cocoa Winnowing Machine
6 Anarchy Chocolate

One of the most ancient forms of removing the chaff from the grain is winnowing. It is an essential step in making chocolate as well as processing rice and wheat. The oldest form of winnowing is by blowing a current of air through the grain so that the chaff is removed. Generally winnowing was done by throwing the grain into the air so that the wind blew away the lighter chaff, while the heavier grains fell directly below. Today, more modern methods are used such as processing with winnowing machines.

The winnowing chocolate definition entails the removing of the outer shell or husk from the cocoa beans. The process can be lengthy, even using today’s modern techniques such as

Shelling and Winnowing of Cocoa Beans

The shelling and winnowing of cocoa beans entails a few processes. First, the machine cracks the roasted beans into bits and pieces of shell and cocoa meat called nibs.

With the use of vigorous and dynamic vibration, the pieces chute down a succession of screens. The vibration then causes the pieces to fall through chutes under the screens where a vacuum sucks away the shell and dust particles into a separate bag. Sometimes a fan is used to blow away the shell instead of a vacuum. The cocoa nibs are what remain. The bits of the cocoa bean “nibs,” fall through the chutes and are gathered into collection buckets to get ready for grinding. 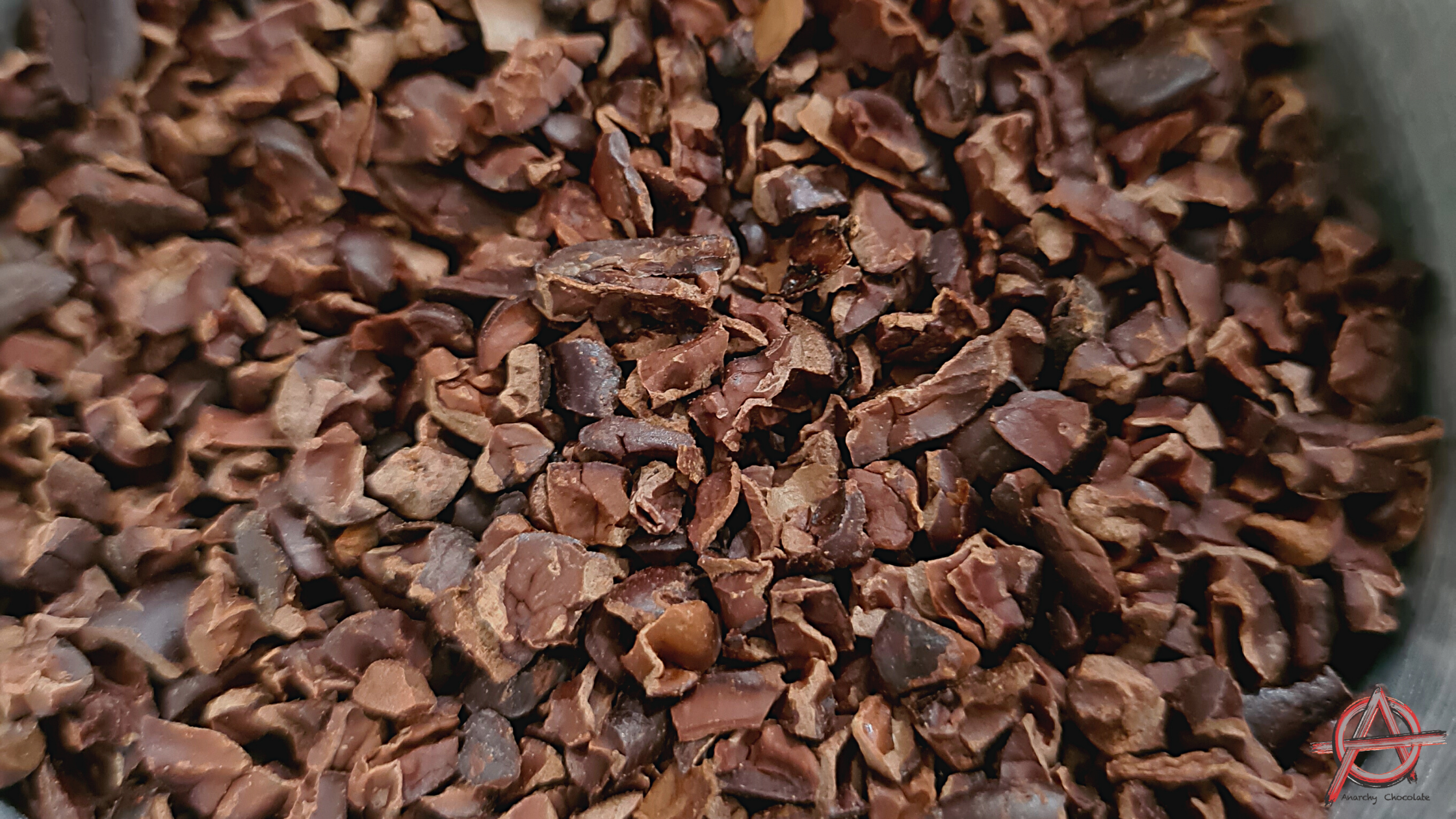 How are Cocoa Nibs Made?

After harvesting, cacao beans are taken out of their pods. Next, the cocoa beans are fermented. The fermentation process lasts between 3 to 7 days, depending on the type of beans, quantity, and fermentation method. After fermentation, the beans are then dried.

Basically, cocoa nibs are an unprocessed form of chocolate. Once the beans are dried they a ground up into the bitter, crunchy, strong chocolate-tasting morsels known as cacao nibs. To reduce the bitter flavour, oftentimes the cocoa is then heated at high temperatures. However, once the bits are heated, they become cocoa.

Cocoa nibs can be used either raw or roasted which reduces the bitter taste. However, roasting the nibs will lower the nutritional value. The cocoa nibs are used in both sweet and savoury dishes. Just one or two teaspoons can add a wonderful flavour to your morning smoothie or oatmeal. We love to add cocoa nibs to our muesli and breakfast cereals.

Nibs also add a nice crunchy texture to ice cream or parfaits. For savoury dishes, add cocoa nibs to a tomato based sauce to make a mole for enchiladas or pasta.

A one ounce (28 grams) serving of cacao nibs provides the following nutritional benefits:

How Can the Shells of Cocoa Beans be Removed Easily from the Beans?

Chocolate is artfully created from cocoa beans. It grows as a bean from cocoa pods of the Theobroma cacao tree. However, before they can be ground into chocolate, there is a thin shell that must be removed. Before advances in modern technology (around the 1700’s and 1800’s), the outer casing or shells of the cocoa beans were generally detached by hand through a process called winnowing.

Further roasting will dry the shell out and make it brittle. The shells are intentionally made brittle so that they can easily be separated from the cocoa bean during winnowing. 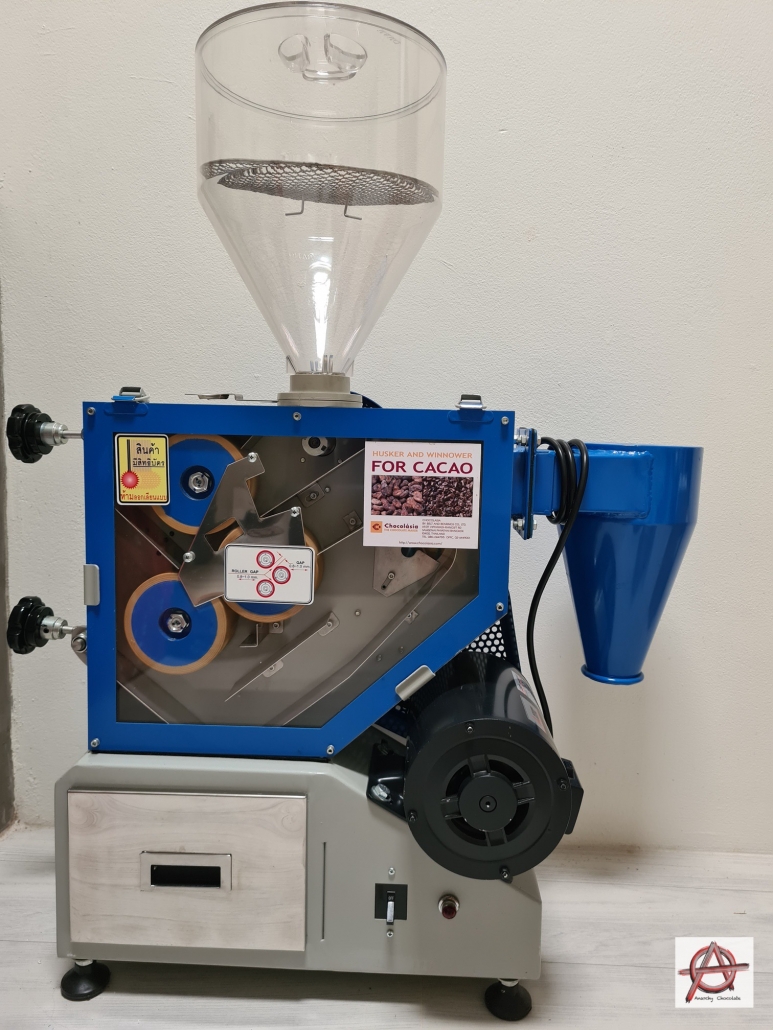 The cocoa winnowing machine is a device that is specifically designed to remove the outer shell from the cocoa bean. There are both electric and manual winnowing machines. However, there are some solar powered systems. For the most part, the electric device is the most effective and time saving.

Most winnowing machines have two functions; to remove the outer husks or shells from the cocoa bean and to separate the cocoa bean into small bits. The basic processing includes

The “nibs” are now ready for grinding.

A great low-tech, home-style and frankly fun but messy way of winnowing chocolate or separating the nibs from the husks is by simply using a bowl and a hairdryer or small fan. If you employ this method, we recommend you do it outside.

One of the greatest foods in life is chocolate. It is an ancient ‘food of the gods‘ that has been around for centuries. At Anarchy Chocolate we like to share the secret knowledge that is needed to make outstanding home-made chocolate from our own home-grown cocoa beans.

Although the process may seem overwhelming at first, it is actually very exciting and quite simple step-by-step process. Join our passion for bean to bar chocolate.

Discover the true passion and love of chocolate that we share every day at Anarchy Chocolate. 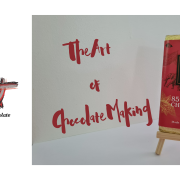 The Art of Chocolate Making 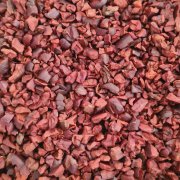 What are Cacao Nibs?
0 replies

10 Essential Reasons Why We Roast Cocoa Beans
Scroll to top